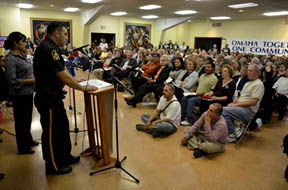 After leaders of OTOC's Immigration Action Team challenged Omaha Police Chief Todd Schmaderer to ensure that immigrants stopped by OPD officers receive fair treatment, OPD issued an official bulletin to all officers informing them that the matricula consular could be accepted as valid identification. (The matricula consular is an identification card issued by consulates verifying the place of residence for foreign nationals.) Photo shows leaders in early encounter with Chief Schmaderer.

OTOC leaders also met with the head of Douglas County Corrections and the regional director of Immigration and Customs Enforcement (ICE) about ways to reduce the number of immigrants with small children being detained in Douglas County jails while they await deportation hearings. ICE has now implemented a new release program which allows up to 100 persons who would otherwise be detained to return home to their families while they await their hearings.