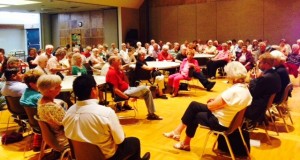 Less than a week after Omaha Together One Community (OTOC) leaders began circulating a statement in support of unaccompanied children at the border, 140 leaders signed on -- including Nebraska Episcopal Bishop Scott Barker and NE Lutheran Bishop Brian Maas.

The campaign was precipitated by OTOC immigration action leader Sr. Kathleen Erickson, who had spent 5 weeks on a mission trip to San Pedro Sula in Honduras (the murder capital of the world). With legal experts and other Sisters of Mercy, the immigration action team educated OTOC leadership about the dangers children face in Central America.