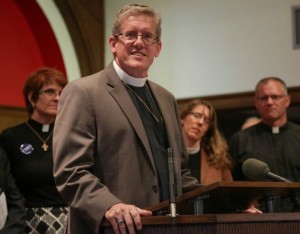 At a press conference organized by The Metropolitan Organization of Houston (TMO), religious leaders from Lutheran, Catholic, Episcopal, Methodist, Presbyterian, COGIC and Baptist denominations called on the President and Congress to "welcome" unaccompanied children from Central America and guarantee protections afforded to them in the Trafficking Victims Act of 2008.

Rev. John Ogletree, pastor of First Metropolitan Church, asserted that "Houston is a hospitable ...compassionate city. We demonstrated that when we opened our hearts and homes to those suffering from Hurricane Katrina. We should do that again."