Shortly after leaders of Together Baton Rouge called on the Justice Department to widen the scope of its investigation into the fatal shooting of Alton Sterling, saying it should include possible state criminal violations, a spokesman for Gov. John Bel Edwards responded, saying that the U.S. attorney's office will not only investigate whether civil rights were violated, but also potential state and federal violations. "If the U.S. attorney's office finds any violation of state laws and believes the officers should be charged with battery, assault or murder, it will refer that back to the local district attorney for prosecution." 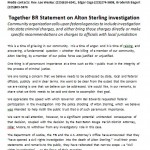 Leaders had argued that if the federal investigation were to be limited to the narrow possibility of a civil rights violation, the consequence of turning the investigation over to federal officials would be "indistinguishable from the District Attorney refusing to conduct an investigation into state crimes," including aggravated battery and murder (see statement at right).

Together Baton Rouge leaders thanked Governor Edwards for "helping to strengthen public trust" in the process.

Together Baton Rouge Pleads with Feds to Play Larger Role in Alton Sterling Investigation, The Advocate

Louisiana Officers in Alton Sterling Shooting Cleared in Prior Use of Force Complaints, Chicago Tribune

The Latest: Governor Thanks City for Peaceful Response, Associated Press

Louisiana Officers Cleared in Prior Use of Force Complaints, WTOP