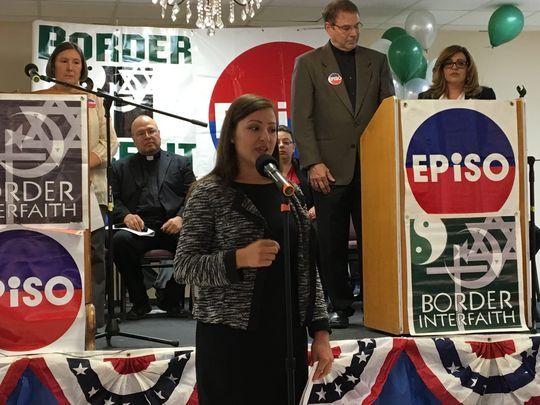 Several hundred Border Interfaith and EPISO leaders assembled for an accountability session, one day before early voting began, to challenge candidates for Mayor, City Council and the Board of Trustees for El Paso and Ysleta School Districts around the issues most impacting residents' daily lives.

Specifically, leaders asked candidates to commit to: ensuring the completion of infrastructure projects on time, opposition to statewide anti-immigrant legislation, and support for the funding of Project ARRIBA to the tune of $1.5 million over five years. City candidates were also challenged to publicly support a living wage for subcontractors who work for the city government.

With the exception of one candidate, the El Paso Times reports that "nearly all the candidates answered yes on all the issues and pledged to support Border Interfaith and EPISO on their agendas."

At the conclusion of the assembly, leaders in the audience were challenged to take note of candidate responses and communicate what they heard to at least ten voters each before Election Day.