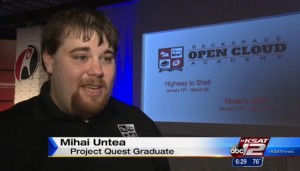 The White House recognized the City of San Antonio for already investing $400 thousand into Project Quest to recruit and train 200 workers with Rackspace. This recognition builds on the $6 Million US Department of Labor grant recently awarded to Quest to train people for IT jobs.