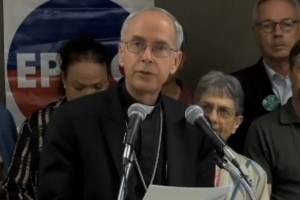 Asserting that anyone under 18 years must have an attorney and should never be subjected to expedited processing, hundreds of bishops and clergy from every major religious denomination in Texas denounced proposed changes to the Trafficking Victims Act of 2008 and called on the White House for a better approach to the humanitarian crisis at the border.

In El Paso, San Antonio, Houston, Austin, Fort Worth and Dallas, religious leaders preached about the crisis at the border, organized relief efforts and held press conferences reminding the White House and Congress of the Judeo-Christian admonishment for nations to "show kindness and mercy to one another, not oppress the widow, the fatherless, the sojourner or the poor (Zechariah 7:9-10)."

Texas IAF organizations are spearheading an effort to ensure that the 2008 Trafficking Victims Protection Act not be weakened, that expedited deportations of children be halted and that religious congregations be granted access to attend to the spiritual needs of the children currently detained in detention facilities.

Allied Communities of Tarrant (Fort Worth):