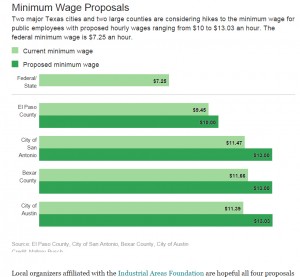 Texas IAF organizations in San Antonio, Austin, and El Paso are at the forefront of potential living wage victories for county and city employees. Due to the work of COPS / Metro Alliance and Austin Interfaith, the cities of San Antonio and Austin are on the verge of passing proposed budgets which would increase wages from more than $11 per hour to $13 per hour. Bexar County and El Paso County also have upcoming votes to raise the wages of county workers from $9.45 to $10 in El Paso and from $11.66 to $13 in Bexar. Graphic to the right shows the relative impact of this wage work .

Meanwhile, thanks to the intervention of Border Interfaith and EPISO, the City of El Paso just passed a wage raise for its lowest paid municipal workers in its budget -- from $9.86 to $10.35.

These are all essential first steps in a larger, methodical campaign to raise the wages of Texas workers to much higher.