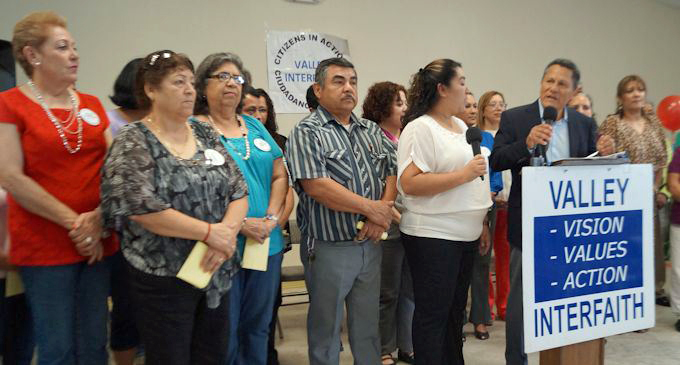 Las Milpas, TX - A culture of disrespect towards Las Milpas residents had become so pervasive that when Valley Interfaith leaders sought funding for a local library last year, the Mayor declared: " is not a Whataburger where you pull up and give your orders....use the school library." The disrespect extended to leaving streets unpaved in the colonia over two decades and turning a blind eye to the 4-hour bus commutes of UT-RGV college students as they trudged on foot over a mile to the nearest stop. Rather than let the City's response deter them, leaders used the disdain to fuel a 7-month electoral brawl including a Get Out The Vote strategy that ultimately replaced the Mayor and deposed dismissive officials.

Valley Interfaith leaders Eddie Anaya, Claudia Garcia, Monse Martinez, and Mauro Hernandez launched a campaign to change the power structure in Pharr, starting with meetings held in homes and at churches. Says Anaya, "We knew, with Valley Interfaith, there was only one way to do this."

Leaders moved on from house meetings to Saturday block walking around St. Francis Cabrini Catholic Church to find out whether anything (or anyone) else needed to be added to the campaign. On these walks, leaders found other leaders and more issues. The agenda grew to include the bridge over the canal, increased funding for workforce training program VIDA, better public transport to UT-RGV, accelerated street paving and lending options beyond payday loans.

A youth contingent from St. Francis Cabrini brought 40 parents and community members to confront the Mayor and City Commission. High school student Aaron Anaya outlined the (repeated) demand for a library and recreational center and asked, "Why can't Pharr invest in our young citizens? Is it lack of planning or just lack of will?"

The youth contingent fortified the voter signup effort, signing up more than 500 registered voters after mass in favor of the updated Valley Interfaith agenda and to attend an accountability session. Other youth pushed through a rainy Saturday afternoon using Facebook and cell phone calls to sign up parents and friends of parents. Inspired parents knocked on doors alongside youth and neighborhood businesses lined up to sponsor pizza and other refreshments.

At an accountability session organized by Valley Interfaith, it was standing room only; the organization had invited all city commission and mayoral candidates to respond to their new 6-point agenda. When two of the incumbent candidates failed to show, leaders dug in. With more walks, phone calls and pulpit announcements, leaders turned out an additional 1,000 voters from Las Milpas (south Pharr) for a game changing upset that resulted in a new Mayor and slate of commissioners.

At the first meeting following the election, Valley Interfaith's 6-point agenda showed up on the City Commissioners' meeting agenda, each point passing with overwhelming support. The bridge over the canal is slated for construction in September 2015. The City hired an architect for the library, which the Mayor wants built "how the community wants it." Pharr doubled funding for VIDA from $50 thousand per year to $100 thousand. The Transportation department is now strategizing on whether rapid shuttles or buses would better meet the needs of college students. Street paving has accelerated from a 10-year plan to a 4-year plan and leaders are currently in negotiation with a credit union and bank to develop family-friendly lending programs to help people avoid the scourge of payday loan sharks.

Eddie Anaya knew things had turned around when the new Mayor said: "Valley Interfaith has a machine in place and I want to be re-elected. Let's build this library exactly how the community wants it."

Forum in Pharr to Focus on Las Milpas, But Only Challengers Commit to Attending, The Monitor (04/27/15)

City to Explore Land Options for University, But Commission Does Not Withdraw Lincoln Park from Consideration, The Collegian (04/22/15)