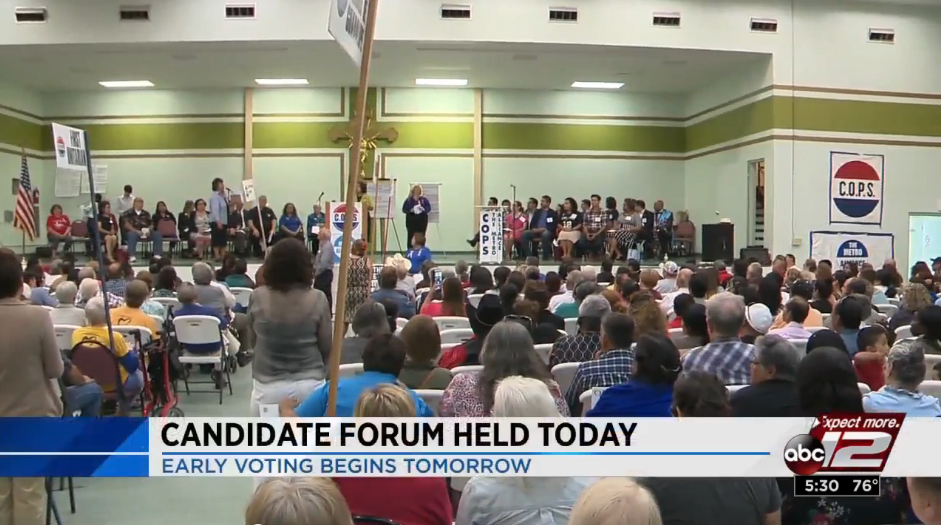 One day before the mayoral election in San Antonio, 750 leaders from COPS / Metro Alliance assembled at St. Henry Catholic Church to challenge candidates for mayor and city council around issues that emerged from thousands of conversations with San Antonio residents.

Specifically, questions revolved around housing rehabilitation, raising the wages of outsourced workers to $9.50 / hour and the creation of a municipal ID for all residents, regardless of legal status. Leaders challenged candidates to commit to raising the City's investment in workforce development program Project QUEST to $2.5 Million.

Leaders additionally secured candidate commitments for the creation of a legal defense fund for the US-born children of undocumented immigrants whose parents are in deportation proceedings. As a result, $250 thousand was subsequently secured in the 2018 budget and is set to be included in the 2019 budget as well.

All Council candidates from Districts 1-8 responded "yes" to each question. Mayor Ivy Taylor, who had committed to participate in the assembly, was absent from the event. The other two leading mayoral candidates, Manuel Medina and Councilman Ron Nirenberg were present. They both publicly supported the COPS / Metro community agenda.