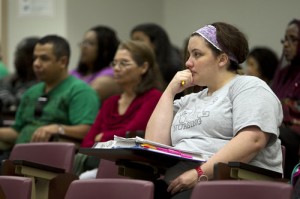 "Capital IDEA Executive Director Steve Jackobs quips that when his organization decides to sponsor someone's community college education, it's like a Catholic marriage: "There's only one way out feet first." It's a joke, but indicative of the two-way commitment between Capital IDEA and its participants..."

In photo, student Liz Spinhirne listens to a speaker during a VIP meeting at the ACC Riverside campus.

A Closer Look at Capital IDEA and Its Participants, Austin American Statesman

In Texas, Working Poor Families Struggle to Get Ahead, Austin American Statesman

School for Success, The American Prospect