1,300 institutional leaders from across the state of Texas convened in San Antonio to publicly launch a campaign to turnout 5% of the projected vote in support of their non-partisan agenda for families. This agenda includes workforce development, public education, access to college, healthcare, infrastructure, a stop to Arizona-style anti-immigrant legislation and a balanced plan to address the $18 Billion state deficit. Leaders committed to organizing 2,625 neighborhood walkers to focus on 166 precincts in order to turn out 225,000 voters this fall.

In advance of the August 28th statewide Convention in San Antonio, Austin Interfaith leaders packed the parish hall of San Jose Catholic Church with leaders who committed to turnout 20,000 voters in support of a non-partisan agenda. This agenda supports protections for immigrants, healthcare in South Austin, and public investment in workforce development project Capital IDEA. Congressman Lloyd Doggett committed to re-introducing Dream Act legislation while Travis County Sherriff Greg Hamilton committed to working with Austin Interfaith to ensure that deputies do not enforce federal immigration laws. Local city representatives agreed to support increased investment in Capital IDEA, as well as support the location of a healthcare clinic on the Southside.

While applauding the California Housing Finance Agency for its use of 'principal reduction' in foreclosure prevention, leaders from One LA-IAF, Communities Organized for Relational Power in Action (COPA), Bay Area IAF and Sacramento Valley Organizing Committee (SVOC) protested that the plan was too generous with banks, pledging 50 cents for each dollar of principal forgiveness versus the 18 cents promoted by the California IAF.

TMO Clergy in Houston Take To the Pulpit for Immigration Reform

In Houston, clergy put The Metropolitan Organization on the map by organizing a prayer service with over 1,500 participants in support of comprehensive immigration reform, and then getting the New York Times to cover its July 4th all-clergy pulpit teaching on the topic. Judicatory leaders from every major religious denomination in Houston urged their clergy to participate in this effort, with widespread results. Since then, TMO leaders committed to turning out 51,000 voters this fall in support of a nonpartisan family-oriented agenda that includes immigration reform. 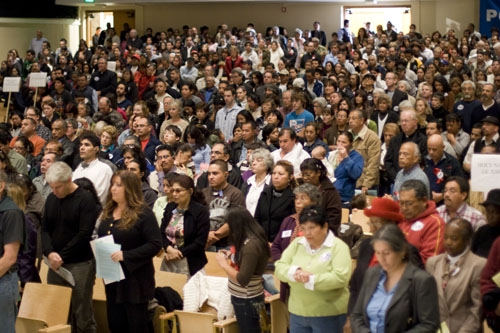 In the face of a tsunami of foreclosures in the San Fernando Valley and South Central LA, One LA-IAF organized homeowners into negotiations with banks and crafted a unique solution involving shared sacrifice on the part of homeowners, the banks and the public.

In San Antonio, COPS/ Metro Alliance succeeded in getting their city council to adopt a resolution opposing Arizona's immigration law and communicating to Texas state legislators that such a law would not be tolerated in San Antonio.

Over 500 participating delegates pledged institutional dues this year with an additional funds leveraged from local businesses. This was the last assembly as a sponsoring committee, which started as an African American Baptist group and transformed itself into a diverse collective of a wide array of institutions.

TMO Diverts Money Back to Repairs After Hurricanes Rita & Ike